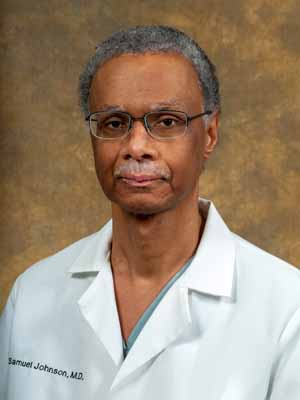 Samuel Johnson, M.D., is a clinical assistant professor of Radiology.

Dr. Johnson has served on the department’s Education Committee, on the Medical Executive Committee of Hutzel Hospital, and as acting director of the third- and fourth-year medical student clerkship in Radiology. He received the Teacher of the Year Award in the Department of Radiology in 1989 and in 2008, and the Physician Difference Maker Award from Harper-Hutzel Hospital in 2018. He has been named a Best Doctor annually since 2010.

Dr. Johnson received his bachelor’s degree in biomedical sciences in 1981 and his medical degree in 1982 from the University of Michigan, followed by a residency in Diagnostic Radiology at Stony Brook University School of Medicine. He completed a fellowship in CT/Ultrasound in 1987 at Stony Brook.

He joined the WSU School of Medicine faculty as an assistant professor (clinician educator) and section chief of Ultrasound in 1990, and served course director of radiologic anatomy for first-year medical students from 2003 to 2017.